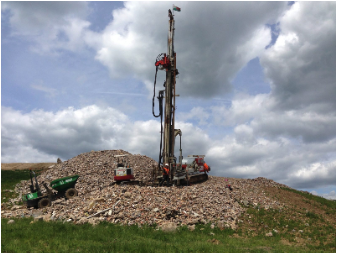 How Landfill Drilling Can Help Manage The Effects of Landfill Sites

The world produces over 2 billion tonnes of waste every year with a large portion of this ending up in landfill sites. Whilst recycling and reusing rubbish can help, the amount of waste being sent to these sites is still astronomical and they are having a devastating impact on the environment. Unfortunately, landfill sites are still necessary to control the population’s waste production but practices such as landfill drilling can help control and manage the effects. We work to ensure that any dangers on these sites are reduced and the potentially harmful elements released are put to good use.

What is a landfill site?

Landfill sites are large open spaces used to dispose of household and commercial waste that cannot be recycled or put in compost, used all over the world. They are sometimes used for waste management such as rubbish separation or temporary storage. The waste taken to landfill sites will either build up to form a large pile or will go into a hole in the ground. Once the area reaches capacity, the ground will be covered and the waste will be left to decompose underground for many years to come.

Impact on the environment

Landfill sites are often considered to have a negative impact on the environment due to the toxins, leachate liquid and greenhouse gases they release.

Certain types of waste, including electrical goods and metals, produce harmful chemicals such as lead and mercury during the breakdown process. When toxins from breakdown waste mix with water, they produce leachates, an extremely toxic liquid which pollutes the surrounding land, groundwater and waterways.

The breakdown process that takes place after compacting and covering landfill waste causes a release of biogas, a mixture of methane and carbon dioxide, into the atmosphere.

These two gases are some of the biggest contributors to global warming and are predicted to account for 10% of greenhouse gas emissions by 2025.

Methane is also flammable which poses a threat for large, uncontrollable fires to break out, further damaging surrounding land and releasing harmful fumes into the air.

Although landfill sites can have a devastating impact on the environment, they are currently entirely necessary to dispose of the tonnes of waste produced by society – an ongoing pressure as the population increases.

However, there are ways this impact can be reduced. Landfill drilling contributes to the monitoring and control of harmful gases and leachates being released into the earth’s elements.

Environmental permits, required to build landfill sites, states that gas and leachates must be controlled to reduce their impact on the planet. One way this can be fulfilled is through borehole drilling, known as landfill drilling in this instance. Boreholes can be drilled into landfill sites to extract gas and leachates that have been released during the waste breakdown process.

Advanced technology and innovative methods, patented by Dragon Drilling, allow us to safely drill into the landfill site, install protective casing and piping and extract harmful gases. Whilst these gases are flammable, odorous and contain large amounts of greenhouse gases, they can provide a usable source of energy. Once the gas is extracted, it is transferred and utilised for energy generation, providing electricity into households. This whole process prevents the gas from directly entering the atmosphere and puts it to valuable use elsewhere.

Leachates leak down into the liner base of the landfill site and form a drainage blanket where part of the soil becomes oversaturated with a puddle of all the toxic liquid from the disposed waste. Our expertise allows us to remove this from up to 85m deep underground and build a leachate borehole which will gather this liquid and prevent the drainage blanket from reforming.

Until there is an alternative solution to waste management than landfill drilling, it is best to effectively manage and control the effects of them to reduce the impact they have on the environment as much as possible.

Dragon drilling have developed and patented innovative techniques that can successfully support gas and leachate extraction from landfill sites where other drilling methods have failed. If you are in the landfill and waste industry and looking for a highly experienced team, our chartered environmental engineers can help. Get in touch to find out more.