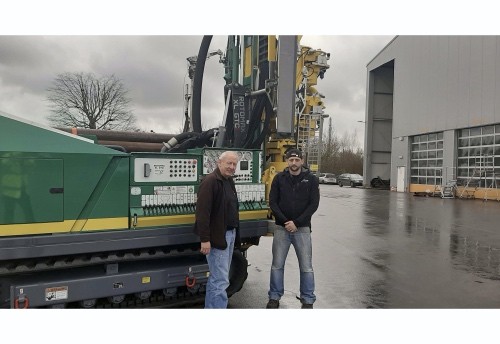 We are delighted to announce that Dragon Drilling have today (14/05/2020) ordered five new drilling rigs from the German manufacturer Geotec of Nordkirchen.

Dragon Drilling have been in discussions with Geotec for over a year including two visits to the Nordkirchen factory to work on the design and specification of a new generation of drilling rigs.

The model ordered is a custom designed Rotomax XL-GTCi which will be capable of drilling boreholes for methane extraction from landfill sites, large diameter water abstraction boreholes and boreholes for ground source heating. All drilling activities are in accordance with the Dragon Drilling philosophy of, ‘The Sustainable Utilisation of Natural Resources.’

The first Rotomax rig is scheduled for delivery in October 2020. The drilling rig is compact compared with the current Dragon Drilling fleet weighing in at just 18.5tonnes. However, don’t be deceived by size; with 20 tonnes of mast pull back and an additional 25 tonnes available using the rig’s breakout clamps it will be the most powerful drilling rig in the UK.

In addition to being operated by a wireless remote control system and ‘easy lift’ rod loading system to minimise manual handling, the rig also has the latest tier 5 engine for reduced emissions and uses far less fuel than conventional drilling rigs. Furthermore, the rig footprint is small enabling operation on sites which have restricted access.

Dragon Drilling’s Chairman, Geoff Ellison, commented, “We are delighted to be the first UK drilling contractor to form a relationship with Geotec. Their drilling rigs are immensely powerful and can be used on our full range of drilling activities. We have been very impressed with the manufacturing facility in Nordkirchen and at the sites we have visited to see the Rotomax in action. Despite the current issues we all face from COVID-19, we are convinced that this is the right time to invest in a new generation of drilling rigs, which will enable our continued expansion.”

The arrival of the Rotomax will coincide with Dragon Drilling’s involvement in the use of ground heat for the growing of horticultural produce using hydroponics, thereby reducing the UK’s reliance on imported crops. The reduction in food miles, coupled with the national trend of changing dietary habits, is one of the key drivers for the €3,000,000 investment by Dragon Drilling.